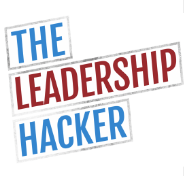 Tim Bradshaw, author of Because I Can, is interviewed by Steve Rush on The Leadership Hacker Podcast, talking about leadership and resilience.

Because I Can with Timothy Bradshaw